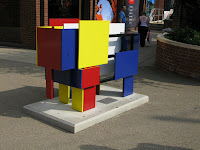 Topped off an idle August with a really great wedding anniversary weekend in Norwich. Which officially rocks - apparently they have won some kind of international 'liveability' award. I can now see why.

We went there because we spotted a random hotel offer in the newspaper - I have been before but only when too young to notice or working too hard to see anything, but it's a great pocket-city. More shops per square inch than anywhere else I can think of, great culture that they actually make the most of (e.g. the riverwalk), fascinatingly diverse and huge castle museum, lovely deco-style hotel (St Giles House), and a fantastic dinner and live blues at 18 Bedford Street.

Special mention goes to the public art trail of decorated elephants (just finished sorry), particularly the Mondrian stylings of the Parallelephant... The other entrants to the pachyderm parade though didn't make as much effort with naming as the pig parade currently on in Bath. OK pig jokes are probably a bit easier but there are surely plenty of words that could be tacked on to 'elephant' for humorous effect? Just for starters I'm thinking Jellyphant, Elephantom, trunk call... you get the gist.

Extra special mention goes to Frank's bar. We stumbled in for tea & cake on Friday afternoon, went back for Hendrick's gin with cucumber before dinner, thought we might as well have a light lunch their on Saturday, failed to find anywhere better for tea so were back for more cake, and then had Sunday lunch there to round it all off. Their chocolate mandarin cake and sunday blueberry pancakes are out of this world, their ethical policies seem sound, their musical choices are varied but always mellow and their decor and service relaxed. Oh and they were showing the film Labyrinth on Sunday afternoon, which holds a special place in my heart (Bowie in tights... mmm... ok it's wrong but honestly this film had a profound effect on the young me!). Basically I want to live there.
Posted by lowkeyhighflyer at 10:49

How about this for a design for a wall painting, in the tried-and-true Art Nouveau style?: http://EN.WahooArt.com/A55A04/w.nsf/OPRA/BRUE-8BWN3L, by the famous English artist, Audrey Beardsley himself. You can also order a canvas print of the picture from wahooart.com.